I drove out to Frederick, MD this morning to pick up a new queen from H. T. Krantz.  He doesn’t mark the queens that he sells, so I guess I’ll have to learn how to do that later this summer.  Queens come in little wooden boxes with one hole blocked by fondant (cake icing?)

The plan was to pinch (kill) the original queen and put the new queen (in the wooden cage) into the hive for the bees to get used to her.That was the plan until I opened up the hive to find the old queen.  Somehow she must have figured out that her job was on the line because the hive was in way better shape than it was during last week’s inspection.  The bees had built out wax on all but two of the frames, and the frames with larvae/capped brood had 50 – 70 percent coverage.

Most of the split frames (partial foundation) had been built out with drone comb on the open sections and worker comb on the foundation sections.  This was exactly what I was hoping that they would do.  Suddenly I was looking at a hive that was performing quite well.  I changed my mind about pinching the queen and decided to do a ‘split’ instead.

I pulled two frames of mostly capped brood and one with nectar/pollen along with one of my partial foundation frames and put them in a new hive, along with the new queen from Krantz.

I painted this one last winter, but didn’t plan to use it unless I caught a swarm or came across some unexpected source of bees.  The split is only using the bottom box right now, but I will add the other boxes as the hive grows.

At this point, I have a single hive.  It is two 8 frame deeps.  I started the hive from a five frame NUC on April the 14th.  This should be the peak of the local nectar flow, bit I don’t see these bees taking advantage of the flow.  I’m less than impressed with how much foundation the bees are or are not building out into comb.  The queen seems to just be laying small patches of eggs (although I haven’t figured out how to see eggs yet).

So far, only eight of the 16 frames are comb and the other eight are untouched foundation.  Granted, I did give them a couple of frames of built out comb and they do seem to be making use of it.  Seven of the frames have caped brood or larvae covering 10 – 30 percent of the frames.  One does have about 90% capped brood, so possibly there is hope.

They do seem to be building out a little drone comb in to open area of the split foundation frames that I made.  I’m concerned that there may be performance issues with this queen, so I have a replacement from H. T. Krantz on the way.

According to local lore, this is supposed to be the time of year when the bees are killing it with the pollen and nectar.  Not much evidence of that this week.  The weather probably has not been too cooperative for nectar production.  I wonder if this means a nectar flow that extends further into June or if the flow will happen all in a few weeks and the bees won’t be able to take advantage of it.

The bees seem to finally be working on building some wax.  Two of the foundation frames don’t seem to have been touched and they don’t seem to want to deal with the green drone frame.  Other than that, all of the other 16 frames seem to be built out and in use.

Most frames are 30 – 60 percent covered in capped brood or wet larvae.  None of the solid caped coverage that I see on the internet, but good coverage and not spotty.

I’m thinking that this queen isn’t too productive.  Ordering a new queen to replace her with.  The new queen should be avilable on May 28th.  Ordered a Pol-Line queen from H. T. Krantz in Frederick.

There is a lot of discussion on the pros and cons of solid bottom boards vs. screened bottom boards.  I’m not convinced that bees need additional ventilation or that having a screened bottom will reduce mite counts.  However, the screened bottom board that I have has a tray that can be used to examine what is getting dropped in the hive.  I’m guessing that I can get an idea what is going on inside the hive by monitoring these ‘sticky’ boards without having to get into the hive so often.

We should be in the middle of the nectar flow, so in addition to adding the screened bottom board I added a medium super.  I think the bees need to work on the foundation in the brood boxes, but now is when supers should be added.  We’ll see if they needed the super shortly.

Starting to see some good coverage or both larvae and capped brood on the frames that had built out wax when the hive was initially assembled.  So far, there does not seem to be much interest in building wax on the foundation frames.  I’m starting to think that these may be lazy bees, but it has been cold and wet most of this Spring.

They could care less about the green ‘drone’ frame.  So far, they have only really built wax on one of the foundation frames.  This was one of my ‘split’ frames.  They do appear to have built drone comb on the open area and have built out worker cells in the area with foundation. 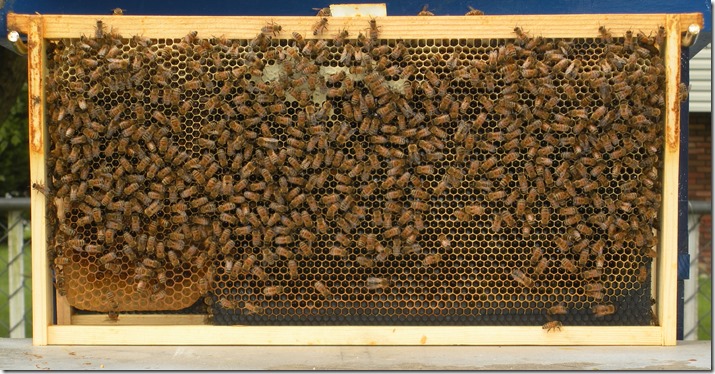 Reversed the boxes.  Sprayed the foundation frames that have not been touched with syrup/HBH to see if that would get the bee’s attention.

First sting (on finger) lifting a frame out of a box.