Checked the “Bees Rules” hive to see if the new queen had been released.  Fondant was cleaned out in the queen cage and the queen was not in it.  Looks like she is out with her new minions.

I pulled two ratty frames from the “Tardis” hive that I’ve wanted to get out of the hives for a while and put them in the “Misty” NUC (swapped them with two frames of foundation).  These were about 50% covered in capped brood so this should beef up “Misty’s” odds of surviving.

This was actually the first time that I tried wearing gloves to work on the hives.  I have been stung on the fingers a few times before now and thought I would try them out.  I’m thinking that the gloves are a good idea, but they sure get messy.  Real sticky with propolis.  I’ll need to figure out how to clean these before they become a regular part of my hive apparel.

The open feeding experiment that I started earlier in the week seems to have increased my robbing problems.   I built cages to go over the hole in my inner covers that I could fit the entrance feeder under.  This should allow me to use them as a top feeder without letting the bees loose in a super above the hive.

The two main hives (Bees Rules and Tardis) seem to be taking a little less than a quart of syrup per day.  They must be storing it as I’m not seeing a lot of new wax, but the brood production seems to still be pretty good.

Made a ‘poke holes in the lid’ quart feeder for Misty and set it on a piece of #8 mesh on the inner cover hole.

Picked up a new queen from Snyder’s.  I’m a bit pissed that she was not marked.  Snyder’s web page says that ALL of their queens are marked.

I couldn’t bring myself to pinch the original queen from Kevin.  I Polled one frame of resources, 1 frame of 30% capped brood, and 1 frame of mostly built out wax, added two frames of foundation and created the ‘Misty” NUC around the original queen.  We’ll see how this one goes… 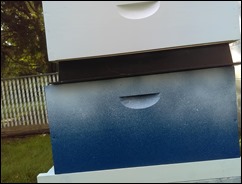 I’m a bit pissed at Brushy Mountain.  I bought a NUC top feeder to use in exactly this situation.  So now its time to put the feeder on top of a NUC and guess what?  It does not fit!!  Not only does it not fit under a super (to protect it) but because the length of the risers on the feeders is the same as the outside dimensional length of a standard langstroth hive there is not enough space for the bees to get up into the feeder.  This product needs to be pulled from the market!!

I got into the Tardis hive to verify that it was queen right and that the new queen was laying.  Lots of wet larvae in the top box.  Found the queen (still marked) in the bottom box.  While I had the queen in a clip I trimmed back the two frames of fat comb in the bottom box with a serrated knife.  This process really got the bees excited.  I need to remember to smoke them hard the next time I have to do this.

I put the new queen from Snyder’s in the top box of the “Bees Rules” hive, between two frames of untouched foundation (after the fact this may have been a real bad placement for a new queen.   Should have been between frames of larvae/capped brood).

I have been feeding the hives using plastic entrance feeders.  I think that I’m seeing some robbing because of this (trimming honey comb in an open hive probably didn’t help either).  Pulled the entrance feeders and set them in the open in front of the hives.

Still waiting to hear from Snyder’s on when they will have a June queen ready for me to replace my original queen.  In the mean time, the Tardis hive seems to be progressing well.  The bottom brood box  has five frames of mostly (20-50%) larvae and capped brood.  There is a lot more drone brood than I would like to see, but the bees know what they want.

The top brood box is being built out with four of the frames of foundation either fully or mostly built out comb.  Four of the frames are still untouched, but the hive is still new and it takes time to build up the worker population.

Caught the queen in the bottom brood box with my spiffy one handed queen catcher and marking plunger.  Added a white mark and let her back into the hive.  The bees were not too happy with her when I released her into the hive.  I hope they don’t reject her.

I didn’t inspect the “Bees Rules” hive this time.  Catching and marking my first queen was enough excitement for one day.

Note: It is a lot more work to inspect two hives than one little hive.

Earlier in the week (June 3rd) I got into the Tardis hive to see if the new queen had been released.  She was still in the queen cage, but the bees seemed to have accepted her.  Not knowing that there is a cork in both sides of the queen cage I popped the staple that was holding the screen and released her into the hive.  She is a lot darker than my other queen.  I sure hope I can find her later to mark her.

The guy at Krantz told me that her line is extremely hygienic and that if I marked her the bees would clean the paint off.  We’ll see.  I’m thinking that he just doesn’t want to deal with the risk of the additional handling and having the mating hive accept her with the paint on.

While the queen was in the cage the rest of the hive was pretty busy building wax and collecting nectar and pollen.  I added the second brood chamber.

Two of the frames in the bottom box have had the wax built too wide to properly squeeze the frames back together.  I’ll have to figure out how to trim these back down to keep the bee space under control with these.

I’ve decided that I really suck at finding bee eggs.  There is lots of capped brood in areas that I thought were nectar storage.  There are a few frames of foundation in this hive though that the bees don’t seem to want to have anything to do with.  Most notable are the all plastic frames and the ‘plastic green drone’ frame.  I pulled these frames that the bees don’t seem to loke and painted them with melted bees wax.  It will be interesting to see it that makes the difference.