Need to catch up here a bit.  Had a bit of excitement this summer.  I tried to replace the queen in my “Bees Rules” hive.  The process had gone so smoothly in the Tardis hive that I actually thought I knew what I was doing.  Wrong!  Went into the “Bees Rules” hive a week after changing the queen and there were supercedure cells everywhere!!  No queen to be found!  Seems the bees didn’t agree with my choice.

Pulled a frame with cells, a capped brood frame, and a resource frame and tossed them in a five frame NUC.  Then I patiently waited a couple of weeks to see if they could raise a queen or two of their liking.

Checked both the original hive and the NUC once the cells had time to hatch, harden and get bred.  Eggs and larvae in every available cell in both boxes.

New queen in the “Bees Rules” box is kicking butt.  The little NUC, however, is a different story.  Either the bees there didn’t like their hyper productive new queen, or I damaged her doing the inspection.  There were about a half a dozen supercedure cells and no queen to be found when I did the hive inspection with a plan to mark the new queen.  This was on the 27th of July.  This is rather late in the summer for the hive to get their new virgin queen out in time to get bred.

I’ll probably end up having to combine the NUC back into the “Bees Rules” box in the fall but for now I’m being optimistic that they can build up before then to the point that they can make it through the winter. 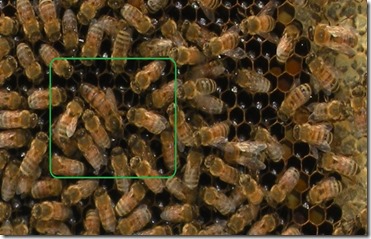