This web site is focused on a sustainable approach to Backyard Beekeeping.  In a perfect implementation this would dictate that the approach would not involve having to buy replacement bees – including replacement queens.  Periodic queen replacement is, however, a reality of beekeeping.

For a stable colony, the queen in your production hive should be younger than 1 1/2 years old.  One prominent Mid-Atlantic beekeeper was insistent that production queens should always be less than a year old (replaced twice per year).   Replacement queens can be rather easily raised using the nuc ‘bee factory’ that was set up for our mini apiary.

OK, this web site is about Backyard Beekeeping.  The model apiary that are talking about is just one beehive for honey production and a small nuc beehive.  With just one beehive, keeping a young queen means that we should make one new queen every year.  My research on the internet for approaches to breeding ‘just a few queens’ always came back with methods and approaches that ended up with 10-20 queens.  For this sustainable Backyard Beekeeping approach we only need to replace one or two (new queen for the nuc as well?) queens per year.  It should also be an approach that minimizes the need for a lot of additional equipment (ideally no special equipment).

OK, so this is a really simplified instruction.  These three steps all that you need to do if the nuc has a productive queen, conditions are perfect, the weather is cooperating, and your new queen makes it back from her nuptial flight.  That is a lot of ifs.  There are several other optional steps that can be taken to increase the probability of success and the quality of the queen produced by this process.  These optional steps are just that – optional.  What happens even with these other processes is basically still what is outlined above.  They typically just involve an additional thing or two to do in getting ready.

It seems that all of the literature and information available on the internet suggest selecting the queens to reproduce from your strongest, most productive, most peaceful bees.  This choice becomes real easy when there is only one hive in the apiary.  With the ‘Sustainable Backyard Beekeeping’ approach there is a choice between the queen in the main honey producing hive and the queen in the bee factory nuc.  By mid-June you should be able to make a judgment call on which queen has the attributes that you want for next year’s hives.

Many of the current queen rearing methods and systems place significant importance on the queen cells being developed in such a way that the volume of available royal jelly and the growth space for the queen larvae not being constrained in such a way as to restrain her growth.  Not providing these two conditions is generally believed to result in poor quality queens.  There are hours of discourse and argument about the superiority of queens raised in swarm type cells (like those created in the above mentioned approaches) over queens raised in emergency cells created expeditiously from available larvae on a worker brood frame.  While there are lots of arguments that emergency cells are often created from larvae of the wrong age, I think the bees know which larvae are the right ones to chose.  There does seem to be an issue though in the bees ability to tear down and super-size older brood comb to provide an optimal sized cell.  This does not seem to be a problem when the selected larvae was laid in brand new (no cocoons) wax comb.

This can rather easily be achieved by simply replacing a frame in the central brood area by a frame of new wax foundation.  This can be in either the main hive or in the support nuc.  Once fresh eggs have been laid on this new wax frame the frame can be moved to the half of the nuc that does not have a queen.

Another option for getting eggs/larvae for the new queen is to use a frame from a honey super.  If the bees have only used the frame for honey the cells will not contain cocoons that make it hard for the bees to break down the adjoining cells to ‘queen size’ an emergency cell.

So the process is that we un-stack a two or three box nuc and let the part without a queen raise a new queen from eggs/larvae in the other part of the stack.  If there are more nurse bees in this new box the bees will be more diligent about creating queen cells and properly provisioning them with lots of royal jelly.

You can lure more nurse bees into the queen creating part of the nuc with a simple manipulation.  One way to do this is by loading the top box with wet larvae and restricting the queen to the bottom box (or visa versa if you prefer).  Do an inspection of the nuc un-stacked.  Find the queen and isolate her with a queen clip.  Sort through the frames placing most of the frames with wet larvae in one box.  Also include a frame of honey/pollen to give the nurse bees something to eat for a couple of weeks.  Put a queen excluder on the bottom box and stack the larvae loaded box back on top.  The nurse bees will move onto the frames with the wet brood.

Getting the larvae that you want

If the queen that you want to reproduce is the one in the nuc a new frame of wax foundation should have been loaded into the nuc a week before sorting out the boxes.  If this was done the nuc should be un-stacked for queen rearing the following day.

If the decision was to reproduce the queen in the main hive a new frame of wax foundation should be placed in the central part of the brood area of that hive a week before this sorting process.  It should be pulled from the main hive when this sorting process happens and it should go in the portion without the queen.  As with the previous option, restack the nuc for a day (giving the nurse bees time to reposition themselves with the wet brood) and un-stack the next day.

If the decision was made to use a fresh frame with unused wax foundation, the real timing of when things happen is actually driven by how long the bees take to build out the honeycomb on the new frame and when the queen decides to start laying in it.  If a nectar flow is on this will happen within a week.  If this is attempted during a dearth the timing will be determined by how the bees are responding to being (or not being) fed.

Using a frame of comb from a honey super, this could happen in just a day or two.  Just remember that you want to do the un-stacking split when there are new eggs and very young larvae on the donor frame.

It is generally accepted that a hive produces a better queen if it has all of the nectar and pollen that it needs.  Feeding a small nuc can be very easy.  they should be fed 1:1 sugar syrup (internally – avoid using entrance feeders!) and small, high protein pollen patties directly on the top bars.  I recommend using a migratory cover with a cutout for a quart jar feeder for the syrup and rolling out the pollen patties to 1/8 inch or so.  The patties should be replaced every four days to avoid small hive Beatle infestation.  The pollen patties are only important for the first 16 days. 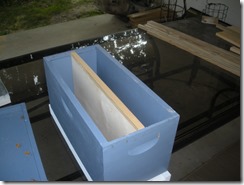 Once the queens have been successfully mated and are laying in the un-stacked nuc they can be deployed to the hives that they were bred for.  At this point, the old queens can be banked  in this equipment until the new queens have been accepted.  Once the new queens are in place the nuc can be recombined with the other nuc box and it can be built up for winter survival.

What if things don’t work?

Assuming that the nuc was used to enhance the spring buildup of the main hive by contributing frames of brood through March and early May, the queen rearing effort would make sense to start in early June.  From start to end, the queen rearing should take about 40 days.

The odds are really good that the first attempt at raising a queen this way will succeed.  If something does go wrong, just recombine the nuc parts (using a newspaper combine) and start the process again from the beginning.  There is easily enough time over the summer to try this two or even three times.  When you do succeeded you have taken a major step in becoming a sustainable backyard beekeeper!

If by August the effort has still not resulted in a new mated queen(s) the option is still available to buy a mated queen from a local supplier (or keep your existing queens over the winter) and have both hives staged for winter preparation.  You may not have achieved full sustainability, but you will have learned a lot about rearing bees in the process.