A nuc hive is really just a small hive.  They typically consist of four, five, or six frames.  While they are generally built for deep frames, nuc boxes are also often made or are available for medium frames.  They are commonly used to hold/introduce queens, house captured swarms, save swarm/supercedure cells and a lot of other purposes.  Because the common practice is to use them to temporarily house bees there are lots of designs and plans to make simple nuc boxes out of plywood and scrap material.  Nucs are so useful that I believe every beekeeper should have an empty one available at all times (even if it is just the cardboard nuc that you may have brought home bees in). 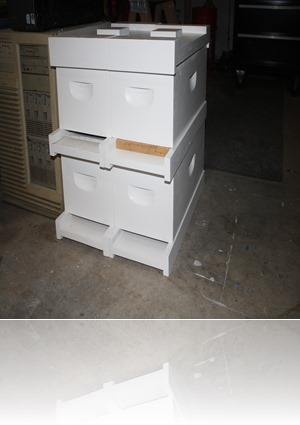 Doing inspections and manipulations is just so much easier on a nuc than it is on a larger hive.  Depending on the time of year, my nucs are only five or ten frames.  They are easily moved around.  Thorough inspections take minutes.  You don’t have to deal with un-stacking supers.  Finding an unmarked queen is significantly easier in a nu c than it is in a full hive with 24 or more frames full of hard working bees.  Nucs are just easier to work with.

In the Eastern U.S. the standard nuc holds five frames.  There is a lot of interest recently in the use of ‘resource hives’ that are a standard 10 frame deep box divided into two four frame chambers.  These are then enhanced by adding four frame nucs over the divided bottom brood box.  The theory is that having two hives in the same box structure helps the bees conserve warmth over the winter.  I currently think that the same thermal effect can be had by simply placing multiple nucs of any similar configuration next to each other.  There is a certain numeric symmetry between four frame nucs and eight frame hives that may simplify hive management when moving nucs to full sized hives. 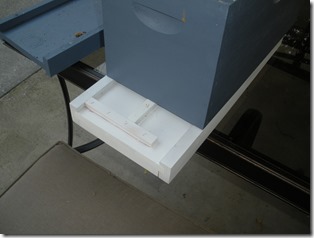 Stealing a bit from the resource hive concept, I have my nucs set up so that I can flip the bottom board over and add a divider board to create two, two frame nucs easily.  This is used to create additional mating nucs if queen cells are on multiple frames in the queen rearing stage.

I use a spare nuc box every time I do a hive inspection.  I basically set up a nuc on a bottom board on the work table that I use for inspections.  As I remove and evaluate the first four frames in a brood chamber I set them in the nuc.  This lets me do the inspection more slowly with less stress to the bees.  I’m not setting frames on the ground or leaning them against the outside of the hive.  I even place a piece of 1/4 inch plywood on the top to keep them less exposed.  This also gives me much more space in the hive I’m inspecting to avoid rolling bees (especially the queen) when lifting/moving frames.

Because almost all uses of a nuc involve swapping frames between hives or merging/splitting between a main hive and a nuc it is important that they use the same sized frames as your brood boxes.  If you use deep brood boxes you need to have deep nucs in order to use them when you need them.

The sustainability approach proposed by this web site makes integral use of nucs.  They are not just for handling emergencies, but are used for key functions from loss insurance to spring reinforcement for the main hive to producing new queens.  Because of their important role in my planning I want nuc equipment that is every bit as good in quality as I have in my full sized hives.  I actually give more care to their assembly, finishing (sanding and filling) and painting than I do to my ‘main’ hardware.  Because they are smaller and easier to handle this is not a big deal though.

In the backyard beekeeper sustainability approach, the nuc is used to make bees.  Because they aren’t used for any honey production it is OK to feed them all of the sugar syrup that they need at any time.  It is real easy to put pollen patties on when the queen is producing a lot of brood.  If the brood chamber starts to get backfilled with nectar/syrup it is simple to swap a frame or two with the ‘production’ hive.  They are great at turning foundation into comb frames that can be donated to the full sized hive.  There are no timing issues with treating for mites or performing other procedures.  The nuc is the backyard beekeeper’s bee factory.

Compared to a productive hive with two or three brood boxes and a stack of honey supers, working with nucs is a joy.  They are easy to stack and un-stack (if they are more than one high).  It is way easier to find the queen in a nuc.  Through inspections are a lot less stressful than they are on a big busy hive.  They are easy to move and change positions with to tune the number of foragers.  The only real drawbacks are that they swarm easily if not regularly monitored/demareed (frames moved out of the brood chamber), and they can’t produce much honey.

Separate pages on this site go into the detail of how the nuc is used as the bee year cycles.  In early spring (Feb-May) the objective is for the nuc to provide reinforcement for the main hive.  From May to August, the nuc is used to produce replacement queens for the apiary.  From August to November, the objective is to strengthen the nuc to provide insurance against winter losses.  From December to February the nuc is just one more thing for the beekeeper to worry about.