The little NUC that I split off of the “Bees Rules” hive with a couple of the supercedure cells raised a new queen in July.  After she had laid up all of the available space in the NUC, the bees – once again – sperceded her.  Not sure if it was a problem with the queen or if I may have accidentally killed her (or if she may have been killed in a robbery).  Anyhow, that was on July 20th and I figured that if the new queen was going to bee bred she should bee there by now. 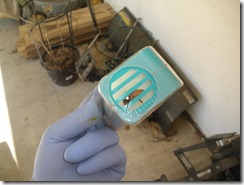 Finding a queen is a lot easier in a NUC than it is in a big hive with supers and multiple brood boxes.  Found her on the second frame and took the opportunity to mark her to make the job easier next time.  Not a lot of larvae to be seen yet, but she is just starting out.  I’ll need to keep the feed on this NUC through the fall.  I did add a second five frame NUC on top with foundation two days ago.  If they can build all of that out they might actually make it through the Winter.

Took a look at the Utah hive (really just a NUC in an eight frame brood box with a medium of foundation on top).  They are building up resources.  They have a lot more pollen stored than I have seen in the other hives.  They have a couple of heavy frames and are building wax in the medium on top.  I’ll keep the feed on them until they have built out all of the frames or it gets too cold for them to make wax.