So I’m settling in on the idea that one of my first priorities in getting beehives working is to have a good inventory of frames that have had the wax combs built out by the bees.  Bees only create the wax comb when there is an active nectar flow on and they need some place to store the nectar that they are collecting.

The nectar flow here in Maryland is in April and May, and there is pretty much no real nectar to collect for the rest of the summer.  The problem that I’m trying to think my way through now is that bees can only make wax when the temperature inside the area clustered by the bees in the hive is over 90 degrees Fahrenheit.  April and May are usually very pleasant months here which does not include hot summer like days.

It looks like I may want to find some way of insulating the hives for the first few months.  I’m thinking that they will need to be covered by some Styrofoam insulation in April and May.

So much for Cindy’s whimsical decoration.  At least they will look cool in June!

I have come to the determination that the very first thing that I need to make this beekeeping “project” work is to develop an inventory of built out comb frame.  Comb frames are movable frames that are used by the bees to store food and raise young.  This is the hexagonal wax honeycomb that first comes to mind when we think of honeybees.

My starting point for approaching this is based on George Imirie’s guidance on Building Foundation and Proper Supering.  George was probably the most experienced beekeeper in my area.  Just how much comb I’m able to build out in my first year is mainly a function of how many bees I can get to work on the task.  With the current plan being to start with a single NUC hive, it seems that I may only be able to get them to build out two deep boxes of comb.  I may only be able to get 20-30 drawn out frames.  I need that much just to get them through their first winter!

If the winds of fortune blow in my direction and I’m able to capture a feral hive I may be able to more than double this amount.  Right now I’m thinking that I may need to come up with a more dependable plan (possibly buying a package or two of bees).  Trapping feral bees is kind of like fishing – easy when you know what you are doing but probably frustrating while you are learning.  It will bee interesting to see how that works out.

Whew…  Getting through Winter here in Maryland.  The groundhog stuck

his head out of the burrow and scurried back in for another six weeks. So what are some of the things that I know now that I hadn’t considered …

The pine that BrushyMountain and Mann Lake use for their hive woodenware it not the same as the clear pine that you buy at Home Depot or Lowes.  The brood boxes that I made from lumber from the big box stores weigh noticeably more than the boxes that I bought from the bee suppliers.  This difference got me to look a bit more closely at the wood and wonder about if the denser pine will survive better in the wild.  Time will tell and I will have to observe this over time.

I mostly wanted to build a few brood boxes (8 frame deeps) just for the practical experience and to get a little feeling for how hive boxes look and feel.  I’m planning to use them as bait hives this season so I’m not overly concerned that they are heavier than the ones I bought.  I won’t be stacking and un-sacking these on a periodic bases. 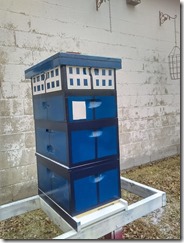 Trying to paint woodwork in an unheated garage in January is probably not a good idea (at least in Maryland).  Both the primer and the paint (exterior latex) that I am using recommends that temperatures be above 60 degrees when painting.  I think that the best temperatures that I got in January were in the upper 40 degree range.

I did some painting where I set up an area inside in the dining room and waited for somewhat warm days outside.  With the wood and the paint nicely warmed in the house, I would grab a box and my paint (and dash outside to apply the coating.  I would then immediately drag my work back into the dining room to dry.  This approach worked much better as to ease of applying the primer/paint both in terms of ease of application and coverage.

Spray paint sucks as a primer

In an attempt to get paint onto a couple of last minute items of woodenware, I thought I would try to use Crylon spray paint.  It had worked (sort-of) for decorating other items that I had already primed and painted with exterior latex paint.  This was probably a bad idea.  The paint just sucked into the wood and does not seem like a good layer of protection.  Weather permitting, I think I’m going to end up sanding these pieces down and properly priming them before trying to put any paint on them again.